With the advent of the Affordable Care Act, many rural hospitals are feeling financial pressures far more acutely. Some are battling for their lives. Or more accurately, for their community’s lives.

In an April 28th interview, Kay Floyd of Monroe County Hospital in Georgia shared a sense of foreboding among rural hospitals, “There’s four contiguous counties and only one hospital in the whole bunch.” The possibility of losing hospitals that serve such large geographic areas is cause for serious concern among the communities they serve.

With less income from insurance companies, and spiraling costs, hospitals are now reexamining every aspect of their revenue cycle.  Including focusing on lost revenue leaks.

Yesterday the Patient Financial Services Director of a rural California hospital shared concern about a leak which was easily remedied. She explained their community has a high population of elderly and low-income patients, and yet their contingency collection agency is not allowing their patients to enter into payment plans. “It’s all or nothing”, the Director divulged.

We discussed the impact of this, and here’s the math: with two to three hundred accounts going to collections each month, there could easily be five hundred accounts a year being denied the opportunity to make payments. While $50 a month may seem paltry to some people, to elderly patients and those on a fixed income it’s a big deal. From the hospital’s perspective, five hundred families paying $50 per month toward their hospital bill is an additional $25,000 per month. Which helps keep its doors open for the next time those families have need.

Alas, an ugly truth surfaces. Contingency agencies who forbid payment plans aren’t really interested in doing what’s in their client hospital’s best interest. Their approach brings a commission-based mentality. “It’s all about the numbers with these guys”, a consumer-friendly attorney working for a contingency agency once told me. He explained it’s because collectors and their managers want to hit their monthly numbers “so they can bonus”.

I winced at that. The emotional recoil reminding me of the last time I was with a salesperson more interested in making a sale – than in helping me. 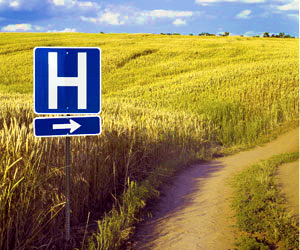 Fortunately, the rural hospital mentioned above is migrating to a much more patient-centric and harmonious process to stop this leak at the end of their revenue cycle. One where patients are allowed to do the unthinkable – make payments for services they were unexpectedly thrust into needing. And one where the Patient Financial Services Director controls availability of payment plans, because as she puts it, “I know my community best.”

And in so doing, this little rural hospital has stopped a flow of lost revenue.  Revenue that allows them to serve their community…  and to continue doing so.